Connected to the Internet

I am connected to the internet - are you? Yes of course. Lucky you. By the way, what is "connected to the internet" can you elaborate a bit further, please? Yes with my smartphone or no is my tablet or no is my laptop sorry is through my Alexa, Cortana, Siri, Rita, Pam, smart-fridge, my smart-toaster, smartwatch, smart-kettle and the list goes on and on. - you get the gist I hope.

The thing about the internet is that every gizmo or device connected to it must have a unique IP address. The web as was originally envisaged was meant to be a platform or forum for Science and Engineering discuss. Academia was understood then to be the main participants. Thus, the number of connections it could handle was not so much of a problem. You could quantify it with all relevant institutions available at the time and multiply that with say 1000 for safety (factor) - you pretty much have all bases covered. Computers were relevant to a few multinationals, some government agencies, and a few universities. That factor of safety looks reasonable enough but with hindsight dopey.

So the number of IP addresses the network could handle was not an issue in its implementation. It never occurred to anyone that this arbitrary number could be surpassed any time soon. IPv4 - the architecture used to allocate addresses on the web at the time had just less than 5 billion addresses. The thinking behind I hazard is some connection with the number of people in the world - just under 5 billion at the time but I digress.

So how is Ipv4 coping now I hear you ask? Well, Not so good. The number of addresses it has cannot now cope with the number of devices wanting to use the internet. IPv4 address exhaustion - is the depletion of the pool of unallocated IPv4 addresses. Because the original internet architecture had fewer than4.3 billion addresses available, depletion has been anticipated since the late 1980s when the Internet started experiencing dramatic growth.

This depletion is one of the reasons for the development and deployment of its successor protocol IPv6. Both IPv4 and IPv6 coexist on the Internet as of now. IPv6 has been carefully designed to avoid future problems which were lacking in its predecessor. IPv4 is still very much in use today and this is due to another clever technology called NAT used in routers.

NAT - Network Address Translation is used in routers which uses its own set of IP addresses for the devices below it (connected to it). These are also known as local/private addresses. Only the NAT and peers of the local network can communicate through private addresses. Thus, because of NAT, we would have two IP addresses - one being public and associated with the router and visible only from outside (internet). The other a private address visible to only those connected to the same router. (See diagram below) 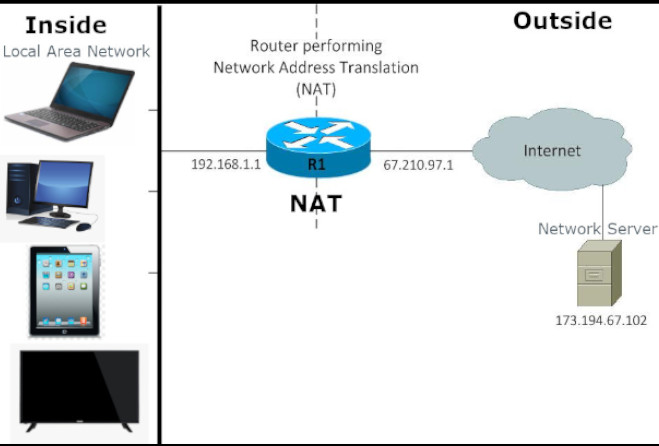 In other words, a network address translation process is whereby a network device, usually a router, assigns a public address to a computer (or group of computers) inside a private network. The main use of NAT is to limit the number of public IP addresses a household, organization, or company must use, for both economy and security purposes as in the aforementioned with respect to the limitation of the original IPv4 architecture.